What is water vapour condensation, how to prevent the appearance of condensation on windows and what to do if condensation appears on your roof window?
This is a frequently discussed topic, especially in the autumn and winter, when the heating season begins.

Learn more about condensation and how to deal with it.

WHAT IS WATER VAPOUR CONDENSATION?

Water always exists in the air as a gas. Water vapour condensation is the process of changing that water, into a liquid. It manifests itself by the appearance of water droplets in specific places, but only in certain conditions. The composition of typical air is shown in the graph on the left. 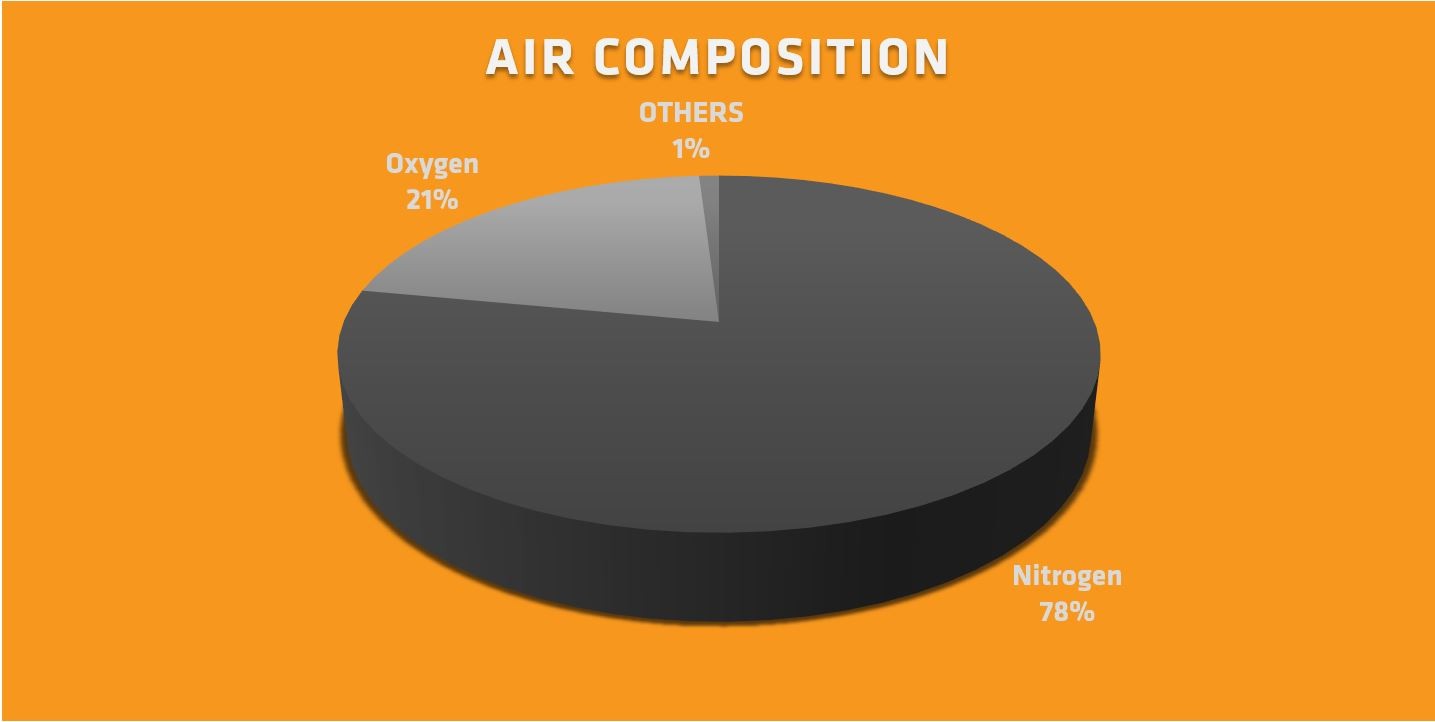 Water vapour in the air belongs to the OTHER category and makes up about 4%of air. Other gases in this category include: noble gases - helium, neon, krypton and xenon; common gases - methane, hydrogen, oxide and nitrous oxide, ozone, radon, iodine, ammonia; other particles - soil dust, microorganisms and substances arising from human activities.

Under the conditions that we normally live in, we have to assume that the quantity of water vapour in the air depends mainly on the air temperature. Warmer air absorbs more water than cold air. This means that in 1 m³ of air at a temperature of 20⁰ C. the maximum water capacity is 17.3 g / m³. When we heat up 1 m³ of air to 30° C., the air will absorb much more water, possibly as much as 31.9 g / m³. We will get the air with a water capacity of 9.4 g/m³ + 7.9 grams of liquid water in condensate. Where will we see the condensation? To understand it, we have to know a definition of the DEW POINT. The DEW POINT informs us about the temperature at which the water vapour in the air is saturated and also that bellow this temperature air will start to condense. Air saturated means that air will stop absorb water because it is filled with water to maximum - of course at the given composition and pressure. 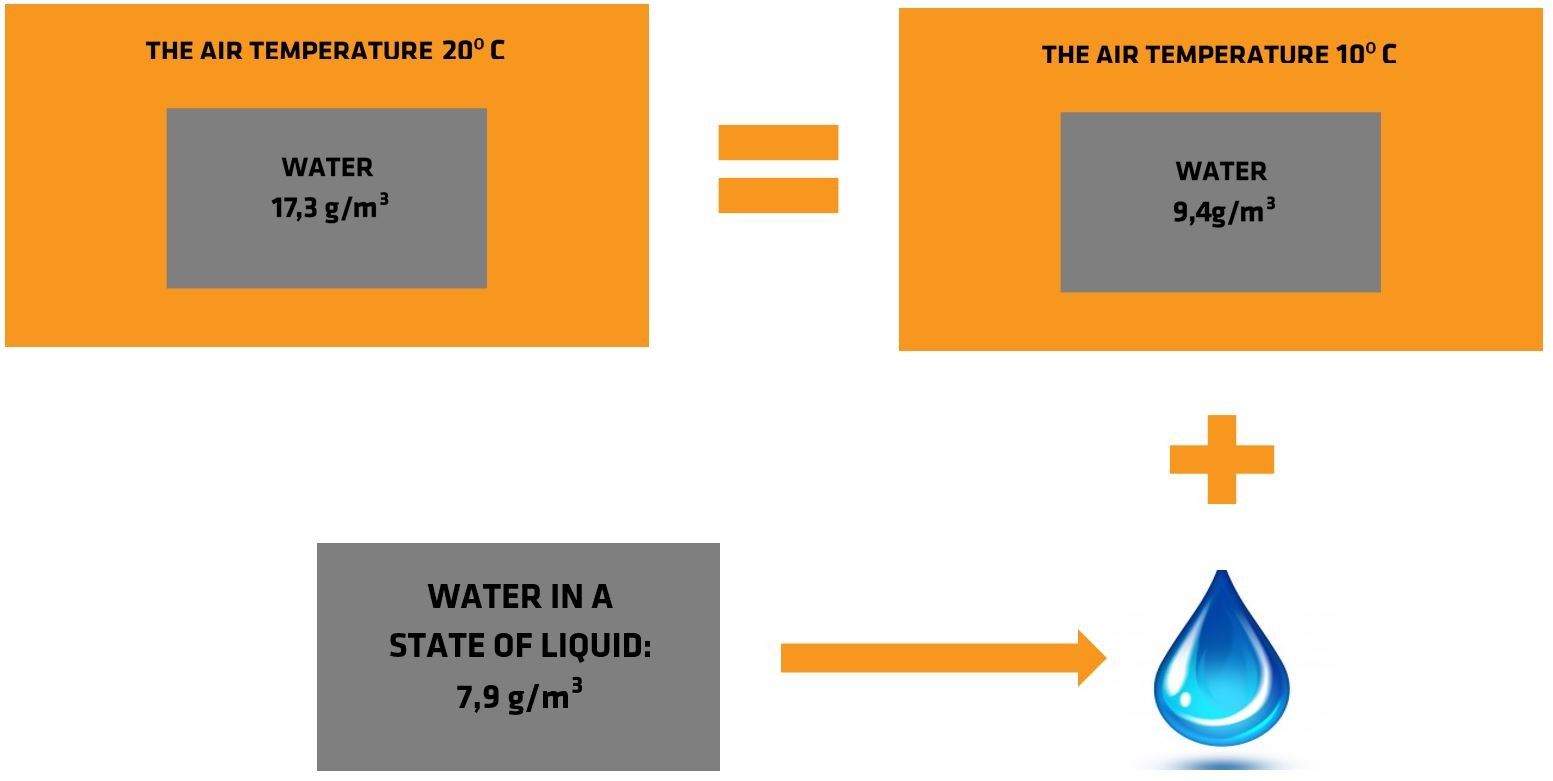 HOW THE DEW POINT WORKS

We have only two situations when condensation is possible, namely when:

1. the air humidity is too high

2. the temperature of internal partition is too low inside the building (partition means: doors, windows)

Air humidity becomes too high in a building when gravitational ventilation does not exist or works inefficiently. Where there is no effective ventilation in the room, the air consumed by users in life processes (breathing, cooking, washing, etc.) becomes more and more humid and eventually begins to saturate. The air begins to moisturize the walls, and in particular thecorners, places near doors and windows. After a while, mould and fungi will develop in these places. Interestingly: 4 average users of a typical home produce between 10 and 15 litres of water in 24 hours.

Thanks to efficient ventilation, used air is blown out, and at the same time fresh air enters a room. Fresh air contains more oxygen and is cooler, which means that when heated, it will be able to absorb new moisture generated in the building, which will in turn be blown out by the ventilation system.

The lack of effective ventilation is usually indicated by condensation appearing on the inner surface of the external claddings. This is due to the fact that the air pressure inside the building is higher than the pressure outside. For this reason, heated air searches for any gaps to expand into, and if the ventilation doesn’tt work, it will escape through the window diffuser. The diffuser, as the name suggests, is used to obtain fresh air from the outside, but this only works if you have an efficient gravity ventilation system. The diffuser is not a substitute for gravity ventilation, it only serves to supply fresh air from the outside into a room with a closed window. With a diffuser, the only direction of air displacement should be from the outside to the inside of the room.

Condensation on a frozen partition, for example on a window, can occur when there is no heater under the partition, or the plasterboard is positioned incorrectly under or above the window, and when the room is under-heated. In this case, there is excessive saturation of water vapour in the room. This is due to the fact that the humidity in the unheated room is already slightly higher than in a normal one. Then, the internal air contacts the cool barrier surface, which in this case is, for example, a window pane. In the case of long-term frosts and lack of a heater under the window, the internal pane begins to cool gradually, and additionally cools the air in its vicinity. The cooling of the air around the window begins to condense.

WHAT THE DEW POINT TEMPERATURE MEANS FOR US IN PRACTICE?

It just means that an object in the room has a temperature lower than the dew point for the given air conditions, causing condensation to appear on the object. If we have several items in a room, the most condensation will appear on the coldest of them.

How to avoid the condensation?

WHAT SHOULD BE DONE WHEN CONDENSATION APPEARS? 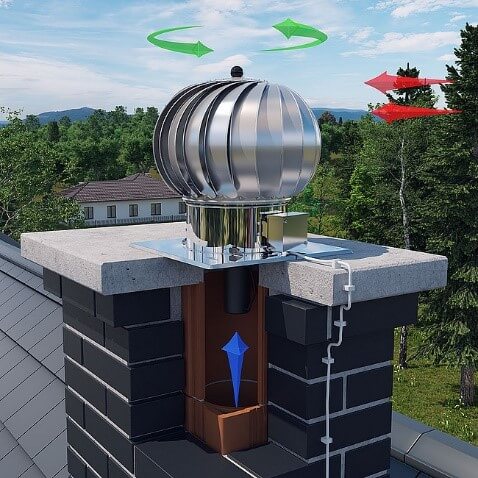 Leave us your e-mail address and always be updated about our promotions and great initiatives!

Leave us your e-mail address and always be updated about our promotions and great initiatives!